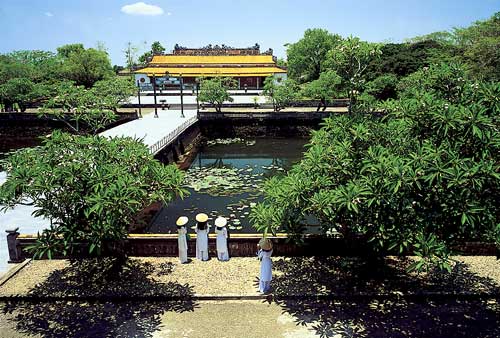 Situated on the Northern bank of the Perfume River, Hue Capital Citadel (at first called Phu Xuan Citadel) was the capital of feudal Vietnam within 400 years (1558 – 1945). This construction started in 1805 under the reign of Emperor Gia Long and completed in 1832 under the reign of Emperor Ming Mang. Hue Citadel is surrounded by a 2.5 km long wall and a wide moat. Access to the Citadel is by way of ten fortified gates, each of which is reached by a low, slightly arched stone bridge across the moat.

In the war, Hue Citadel was heavily destroyed, however, some parts do still remain and will give you an idea of what a magnificent imperial capital Hue must have been: the Nine Holy Canons (the massive but symbolic weapons were cast on the order of Gia Long to protect his new capital). the Thai Hoa Palace (used for official receptions and other important court ceremonies); the residential area of mandarins; the famous Cuu Dinh or Dynastic Urns of the Nguyen Dynasty.

The Heavenly Lady Pagoda was built in 1601 by Lord Nguyen Hoang. The pagoda is situated on Ha Khe hill, on the left bank of the Perfume River, in Huong Long village, 5km from Hue city.

The pagoda was heavily damaged in 1943. Bonze Thich Don Hau hence organized a great renovation of the pagoda, that lasted for more than 30 years. Nowadays the pagoda is very well-maintained and very welcoming to all visitors. 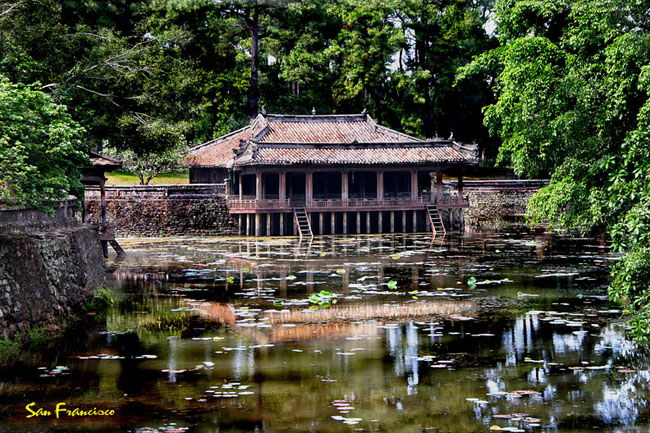 Tu Duc's tomb is located in a narrow valley in Thuong Ba village, Thuy Xuan Commune, 8 km from Hue. Its construction started in December 1864 and finished in 1867. Inside the surrounding wall, nearly 50 constructions were built on terraces of various levels.

The Tomb is 14km form Hue, on Cam Ke mount, near Bang Lang fork, on the west bank of the Perfume River. In September 1840, the construction of the tomb began. Emperor Thieu Tri, his successor to the throne, continue this task according to his father’s plans. The construction was fully completed in 1843. Minh Mang's tomb is a standard architectural complex consisting of 40 constructions (palaces, temples, pavilions, etc.)

To visit Gia Long's tomb, tourists can go by boat about 18 km along the Perfume river and then land directly at the wharf of the tomb, or they can go about 16 km by car to Kim Ngoc wharf, take the boat from there and walk for some more kilometers. Gia Long tomb was built in 1814 and completed in 1820. The whole compound is spread on a joint mountain with 42 small and big mounts.

Khai Dinh tomb is 10 km from Hue. The construction of the tomb was started on September 4th 1920 and lasted for 11 years. In comparison with those of the preceding emperors, Khai Dinh’s tomb is much smaller in surface (117m x 48.5m) but it is very elaborate. It is the result of the interminglement of many architectural trends: European and Asian, as well as ancient and modern.